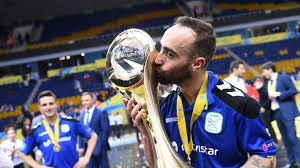 To celebrate the UEFA Futsal Champions League Final Four kicking off this weekend, we’ve launched our new feature – the Friday Futsal Quiz!! (We might change the day…)

To get us going, we’ve selected team names from the UEFA Futsal Champions League history and some made up names that would be more suitable for fantasy or 5-a-side… Can you spot the real ones among the fakes? Take the quiz and send us your results – shout outs for anyone who passes (80%).

Unlucky – you only reached the Elite round…

#1. Starting with an easy one to get you warmed up: futsal or fantasy? FC Barcelona

Of course – Belgian champions a lot back in the day!

Not quite… Kairat Almaty would be the Kazakhstan representatives!

Expect to lose if you got this wrong…

We used their old full name to confuse you… But of course, 5 time winners, Inter Movistar…

One from Pro Evo… and our Fantasy Premier League league!

Another Irish representative in the Champions League, no vampires…

Not a futsal team.

Champions of Sweden in 2011… without Falcao.

“I asked Zlatan [Ibrahimović] if we could use the name and he was okay with it,” Eddy Lopez told UEFA.com.

Fantasy team, currently 95th in the Futsal FPL… with Martial up top, of course.

Another fantastical name in the REAL champions league!

Yep… a name more suited to 5-a-side than futsal, last in the Champions League 2007! What happened to them?

Bugger off. Don’t say that to your English friends… Yep, Latvian futsal team in the 2004-05 Champions League…

Wow… if ever a fantasy name crept into real life, this is it! Israeli champions 2003!