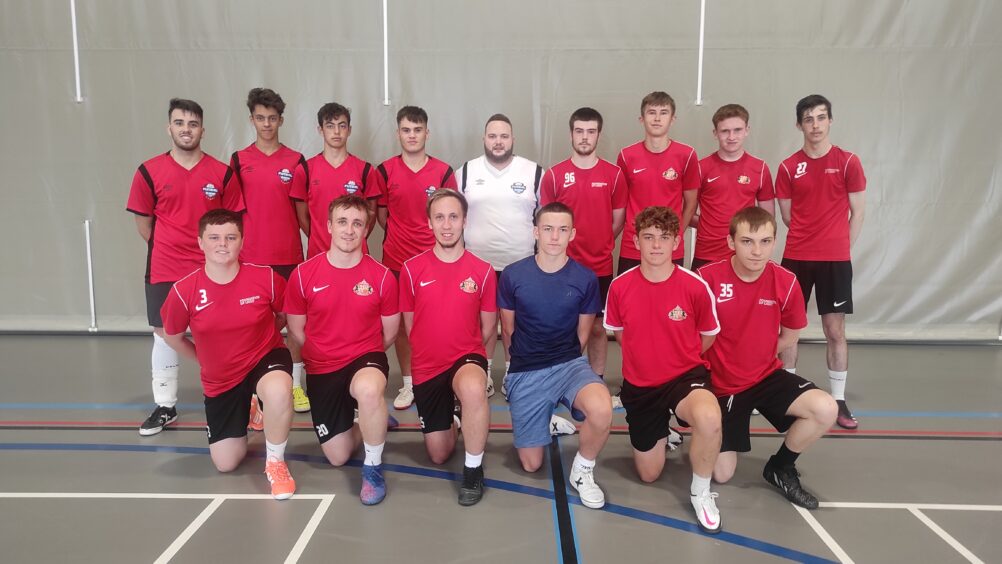 Well, just over a week since Futsal Camp 2022 finished and all the children (and Vicente) got home safely, I wanted to write a brief review. I want to share some of the decisions and plans for the future, as much for myself to look back on and make sure we grow, but also if you are interested in getting involved, so you have some of the background.

Futsal Camp couldn’t happen if it was just me. While I did take on a very hands on role – teaching English, coaching, driving, cooking and more – it wouldn’t have been a success without certain people and organisations. So thanks to at least the following and probably more too. Vicente, Ian Dipper, Umbro, Foundation of Light and the Beacon of Light, Man Utd, English Lanes Academy, Adecor FS, Uni of Sunderland and Wellbridge for the matches and all the people who shared the camp to their networks.

I came up with Futsal Camp UK (Middlesbrough Futsal Camp originally) when I was living and coaching in Spain. Parents would ask me about language and futsal camps to send their children to. These children weren’t interested in football – of which there are plenty – because they simply don’t play 11-a-side. That’s a story for another time, but in general, futsal players from Spain have only ever played futsal.

So I set about organising a futsal and language camp with children from Catalonia making up the audience for the first few years. In fact, it wasn’t until 2019 when Vicente Torres came on board that we opened up the audience to the South of Spain and Mallorca. 2022 was the first non-Spanish youngster that came along as Achille, from France, joined us – hopefully opening the doors for more nationalities in the future!

2022 was the first post-covid futsal camp and the sixth overall since its inception in 2015. Before covid, we had reached 15 children coming to Manchester and there was a lot of interest in the 2020 edition. Including from places such as Morocco, Brazil, Kazakhstan and Italy. After two years off, it lost some of the momentum, those children got too old and despite some early interest, we ended up with just four children making the trip.

Covid, my situation and marketing

Covid definitely had some effect but I can’t blame it totally on that. During the main months for promoting the camp in November and December, I was struggling with my situation in Poland. They had just told me that they had no money to pay me and they hadn’t sorted out my accommodation. I was being moved from pillar to post. I’d given up a nice existence in Malaysia to take up that opportunity and around that time I was as low as I’ve ever been. This definitely affected my mood and motivation for promoting the camp. Fortunately, everything seems to be looking up for now and with Vicente, we have a solid plan to market 2023.

To be financially viable, especially as it’s such a good price, we need around 12-15 foreign kids. With just four (plus a group of 12 from the Foundation of Light futsal scholarship) I had to make some cuts and changes and it became a bit of a futsal camp “lite”. Karting fell by the wayside, I took English classes in the residence and we moved to Sunderland. This was certainly helpful in reducing the outgoings – everything was around 15% cheaper than Manchester from parking to food and hall hire to accommodation.

I’m happy with how it turned out and the children went home happy, but being the perfectionist I am, I would have preferred to give them a fuller experience – with a full technical staff, dedicated English teacher, catering service and karting. Unfortunately though, we’d have needed around 12 children to reach that level!

The experience of the children is my main motivation, as well as providing opportunities for English coaches and players. If all goes well, it’ll make some profit to invest into English futsal through sponsorship or putting on courses. For a better experience all round, we’ll be hoping for at least 12, with different nationalities – so if you are aware of children looking to learn English, you know where to send them!

And for Futsal Camp 2023, I am planning for all the above and more to make it the experience I will be proud of delivering. There is such a huge potential with Futsal Camp UK and we’ve now found a perfect place to host it. The Beacon of Light is ideal for what we are trying to do: A centre with the best facilities for futsal plus it’s a foundation with a focus on the local community, especially youngsters and it ties in well with my aims for Futsal Camp.

From 1st September, the website will be open for 2023, with all the options. There will be an option for English speakers too. I’m open to suggestions and collaborations. The ambassador programme will be back and better, where one can earn up to 15% of the sales and we’ll be putting on the futsal cup and a futsal coaching clinic too next summer. So there is something for everyone!

Thank you for reading. In conclusion, longevity is key, as with most things. It’s yet to make money, but I am so convinced in the project that we’ll keep going until it becomes a success, which will have benefits for a lot of people. There have been setbacks, but all just serve to motivate and put us on the right track and I feel like with a few other things, Futsal Camp is ready for a successful future.