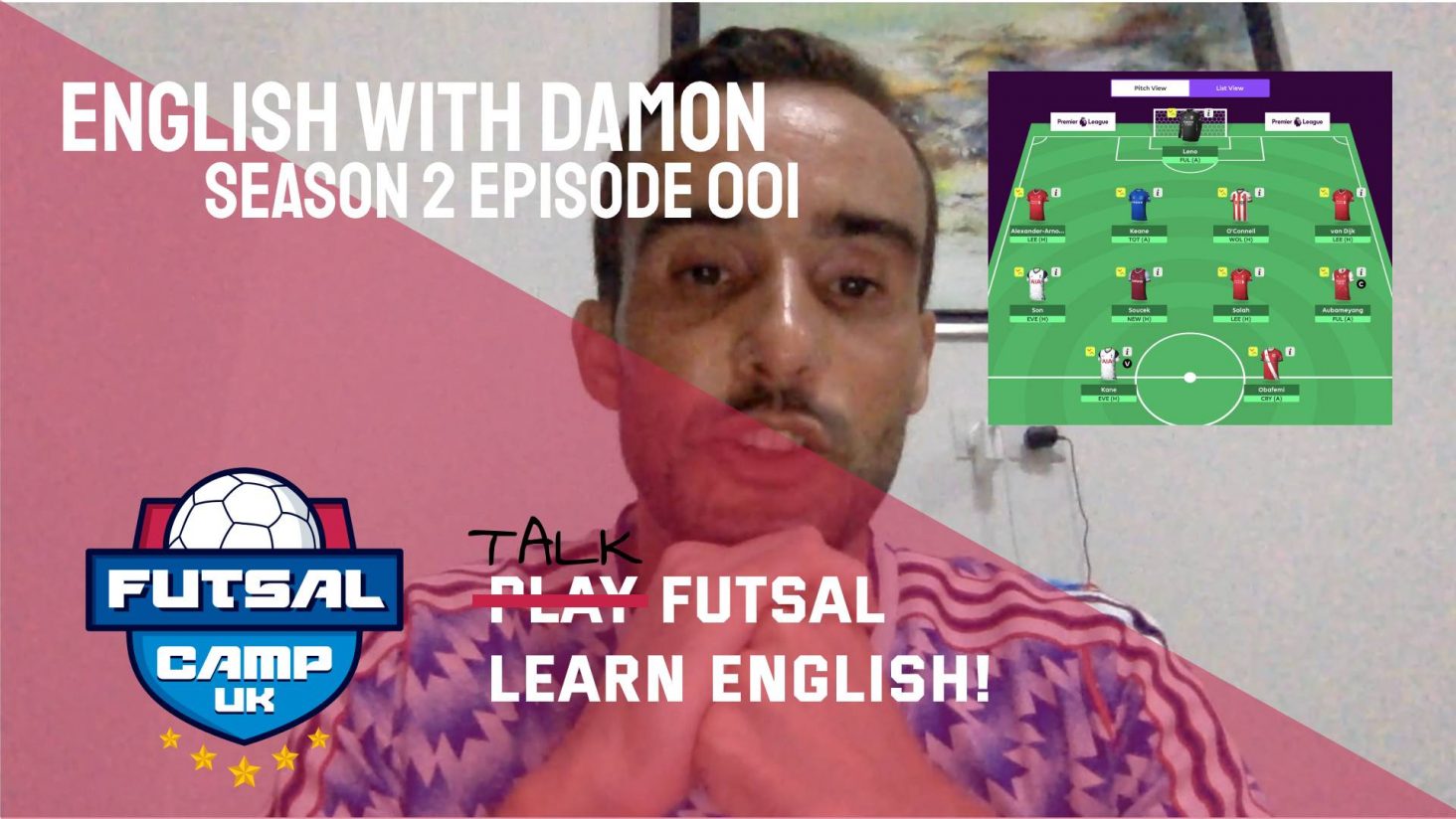 I select my Premier League fantasy team ahead of game week 1!

Hi guys, welcome to English with Damon Season 2 and episode 1!

I have partnered up with Futsal Camp UK to bring weekly podcasts talking about, amongst other things Fantasy Premier League!

So, before we begin, have you joined the Futsal Camp UK Fantasy Premier League? If not, just click on the link in the description (here): https://fantasy.premierleague.com/leagues/auto-join/xttgos. Entries will be accepted until game week 3. I’m offering a prize of a retro football shirt of your choice (if available), like the one I’m wearing. I’ll try each week to do an update, talk about the Premier League and also teach you a bit of English along the way!

And what better way to learn English than by getting your Fantasy Premier League news?! We’ll also chat futsal regularly when the major leagues get back up and running. Look out for a new episode every Friday on Spotify, YouTube and you will always be able to access them here on www.futsalcamp.uk. Listen a few times, write down words you are hearing for the first time and try to follow the whole episode, getting the gist of it more and more each time. It’s the fastest way to learn a language and it’s the way I learnt Spanish and am now using the same methods to learn Malaysian! I hope you enjoy it and if you do, share it with your friends and team mates on social media!

Of course, if you are here to learn English, you will also be interested in Futsal Camp UK 2021. We’ve set the dates already for July 2021 and we have a VERY special price if you book by 31st October. Our camp is the ONLY futsal and English camp in the UK and is half the price of any other football camp, while giving you an even better experience! Visit www.futsalcamp.uk to find out more!

In Episode 1, I’ll talk you through my team selection for game week 1 and give you some of my reasons for choosing them! Good luck!

Right, so I’ve gone for a 4-4-2 formation and I’ve neglected the bench to make my money go further.

In goal, Arsenal’s Jay Leno, with a fairly straightforward game away at Fulham, I’d expect them to win. I did go for Newcastle’s Dubrawka initially, but he’s out injured!

Now, I’m usually not one to pick Liverpool players because of the rivalry with Manchester United, but as United aren’t playing this week, I decided to go for it in game week 1 and have the duo of Van Dijk and Alexander Arnold. With an easy game at home, they are guaranteed to get points, though I will not be supporting them! Keane and Sheffield United’s O’Connell make up my back four.

In the midfield I have Tottenham’s Son, Mo Salah and Aubameyang as my big hitters. I decided early on Aubameyang, so I have built my team around him. With De Bruyne and Greenwood out of the first week, it freed up space for Salah and Son. Soucek is a good cheap option I think – he did well after signing in January and could be a player to grab a few goals this season.

Up front, I wanted to have Martial, out of blind faith. He’s a good option in midfield but as a striker, will he be as prolific as the other number 9s? I’m not sure. As it is, and because he’s not playing, I have gone with Harry Kane. A home game against a strong Everton, but he’s going to get goals, so a good option.

It took me a few goes to get to this team and I’ve been affected by fixtures, but I am happy with my squad and confident I’ll be nearer the top than the bottom this time around! As I’m writing this, I may even put more effort into my team!!

Remember, enter the league using the link in the description or enter the code xttgos. Over 100 futsal fans in with us so far!!

Do you want to try and tell me your team? Send us a video and we’ll share it on our instagram! And don’t forget to follow us on FutsalcampUK across all platforms.

Good luck for game week 1! I’m going to pack to head to a desert island and I will check my scores when I get back! Have a good weekend!

Do the worksheet during or after listening to the podcast. Don’t use the transcript unless you really need to! Listen as many times as you like!

Can you find examples of the following?

Can you find any phrasal verbs?

When are entries accepted until?

Which football team do I support?

What formation have I chosen?

Why don’t I pick Liverpool players?

Who have I built my team around?

Why isn’t Martial my choice for a striker?

Look them up and write down the meaning in your language, or even better, write a definition in English.

“I’m not usually one”